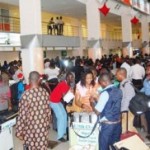 In a most shameful development, no fewer than 300 Nigerians living in the Republic of Botswana have been reportedly deported in the past few months, after the authorities refused to renew their permits.

Meanwhile, the angry deportees want President Goodluck Jonathan and the National Assembly to quickly look into the relations between Botswana and Nigeria in order to ascertain the true conditions of Nigerians living in that country. The returnees, most of whom had lived and worked in the Southern African country, said since the assumption of the current president, General Khama, whose mother was of British origin, Nigerians in that country had been subjected to dehumanising conditions and racial abuse, even when, they claimed, they had been law-abiding and of good behavior.

They believe that that the target of the Khama government had been how to get rid of innocent Nigerians pursuing a just course or doing genuine businesses in the country, claiming that all their efforts to make the Bostwana authorities understand that they were peace-loving and not interested in criminal activities fell on deaf ears as they were only interested in sending them out without any reason.