Home National News Odd News 11-year-old Boy Caught with a Gun in School, Says it is for...
Facebook
Twitter
WhatsApp 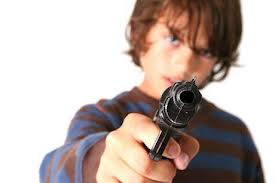 With the Newtown massacre still fresh in the memory of most Americans, and while President Obama is trying to figure out how to review the gun laws of the country, an 11-year-old boy has been caught with an ammunition in school, south of Salt Lake City.

The boy, who said he brought the gun to school to protect himself from a Newtown-style attack, then brandished the pistol at three classmates during recess. He has been detained on assault and weapons charges, a school spokesman said. A sixth-grader, the boy took the unloaded .22-caliber handgun to his school south of Salt Lake City in his backpack on Monday, a spokesman for the Granite School District said.

Also, some ammunition was found in the backpack, but it did not appear to go with the gun, the spokesman, Ben Horsley said. No one was injured in the incident, which occurred as jittery parents, teachers and students around the country faced their first day back at school since 20 children and six adult staffers at the Sandy Hook Elementary School in Newtown, Connecticut, were shot to death by a lone gunman last Friday.

The 11-year-old student at Utah’s West Kearns Elementary, who was not publicly identified, has insisted he brought the gun to school to “protect himself and his friends from a Connecticut-style incident,” Horsley said. However, the boy is accused of waving the gun at three classmates on a soccer field during recess. Later on Monday, one of those students and a second classmate alerted their teacher, who “immediately took the student into custody and took him down to the principal’s office,” Horsley said.