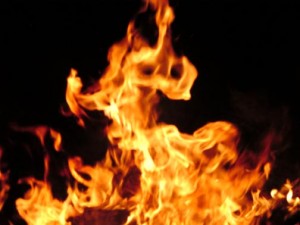 The last floor of the affected building situated at 7A Obadina Street went up in flames around 3.00pm when most of the residents were away for their businesses.

No one is sure what caused the fire, but reports had it that the fire was caused by a girl trying to cook.

A source said, “We were watching football match in front of the building when someone perceived smoke and we immediately went upstairs to check, only to find a room in flame and the children from that room running away. So I cannot specifically say it was the stove that caused the fire.”

It was learnt that some of the residents who were in their rooms were affected by the smoke, while some of the youths who tried to assist in putting out the fire before the arrival of Fire Service men and an Igbo trader were badly injured when some blocks caved in during the rescue operation.

The timely arrival of firemen from Orile, Onikan and Ajah areas of the state saved the situation as the flame which had spread to adjacent buildings at Obadina and Obey streets respectively was eventually put out around 4.45pm, with the support of neighbourhood watch officials, Community Development Association, CDA members in the area and the Police.

The Lagos State Ambulance Service, LASAMBUS officials gave first aid treatment to the injured people when they arrived at the scene, and later took them to the Lagos General Hospital for proper medical treatment.