The party organised by, Rotimi Akeredolu, the candidate of the Action Congress of Nigeria, ACN, in the last governorship election in Ondo State to thank members of the party was almost marred by violence as aggrieved members attacked the Director of Planning and Mobilization of the party, Tayo Alasoadura. 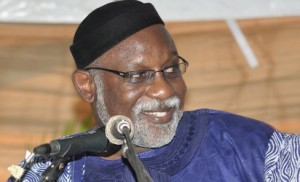 Mr. Alasoadura narrowly escaped being lynched by irate party members over allegations that he collected but refused to distribute money and other gift-items, collected from the leadership of the party, meant for the members for the October 20 governorship election. The ACN members had converged at the party secretariat along Ilesha road, Akure, to witness the thank you party organized by Mr. Akeredolu. The members quietly discussed Mr. Alasoadura’s actions in groups before the arrival of the party chieftains and bigwigs. They condemned the actions of the former finance commissioner over his failure to distribute enough money to all the eighteen local government areas of the state. They also accused Mr. Alasoadura of keeping the money collected from ACN leaders, including a national leader and former Governor of Lagos, Bola Tinubu, for himself. The programme was about to start when the accused arrived the venue changing the mood at the event. As soon as Mr. Alasoadura alighted from his car, the atmosphere became tensed as some members rained insults at the party chieftain openly, blaming him for the party’s poor outing in the last October governorship election in the state. The ACN came third in the election, behind the winner, the Labour Party, and the runner-up, the Peoples Democratic Party. The development took a dramatic turn when some aggrieved youth started throwing pure water sachets to the direction of the famous politician while other chieftains who did not want to be insulted by the irate members hurriedly left their seats under the pretence of appealing to the angered members The members accused the party leader publicly that over seventy motorcycles given to him to deliver to all wards leaders for onward distribution to the party loyalists across the state were kept in his compound; while over N1 billion given to him by the party leadership meant for election mobilization was alleged to have been improperly managed. As the irate party members were throwing pure water sachets towards the direction of the leader, they were also marching towards him when Mr. Akeredolu, who was holding a brief discussion in one of the rooms at the secretariat, came out to appeal to the members. It took the governorship candidate over twenty minutes to appeal to the aggrieved party members, who came from all the 18 local governments in the state, before they let Mr. Alasoadura be. The embattled Director of Planning and Mobilization quietly sneaked out through the back door when the governorship candidate was busy addressing the party members.