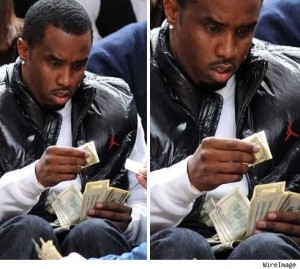 Earlier in the year, Forbes Magazine released the Top-5 Richest Rappers Of 2012 with Diddy on top the list for the second year, Jay-Z dropped down to second after coming first in 2010.

Many of these rappers rose from rags to riches by tirelessly working simultaneously as producers, writers, musicians and businessmen. However, their hard work has quite literally paid off and has made them millions, according to Forbes.

In case you missed it before, below is the FORBES 2012 Top Five Wealthiest Rappers:

1. Sean “Diddy” Combs
As of April 2012, his Net Worth was a cool $550 million.
Earnings according to Forbes: 2011: $35 million, 2010: $30 million
Diddy’s business ventures, along with his career as a rapper, made him the richest rapper on the planet, built fortune chiefly through clothing line Sean John, record label Bad Boy and Ciroc vodka. Acting gigs, television shows and guest appearances add to coffers. He told Forbes in 1999: “I’m gonna be bigger than David Geffen.” Not there yet though, but if there’s anyone who can get there, Diddy can.

2. Shawn “Jay-Z” Carter
Net Worth: $460 million – As of April 2012
Earnings according to Forbes: 2011: $37 million, 2010: $63 million
Beyonce’s sweetheart and father of one of the most popular babies in Hollywood, Jay-Z sold Rocawear clothing label for $204 million in 2007; signed 10-year $150 million Live Nation deal in 2008. Now boasts an impressive portfolio, including shares in the New Jersey Nets as well as his input in fashion, music and restaurant business.

3. Andre “Dr. Dre” Young
Net Worth: $260 million – As of April 2012
Earnings according to Forbes: 2011: $14 million, 2010: $17 million
Superproducer/rapper,Dr. Dre may not have put out a new album in the last 10 years, but the rapper and producer has reaped the rewards from his business. He helped launch careers of Snoop Dogg, Eminem, 50 Cent, expanded wealth with Aftermath record label, Beats headphones and HP laptop line. On 11th August 2011, Dr Dre reportedly sold 50% stake in Beats Electronics, the headphone company to Taiwanese smartphone maker HTC for £191 million ($310m).

4. Bryan “Birdman” Williams
Net Worth: $125 million – As of April 2012
May 2010 to May 2011 Earnings according to Forbes: $15 million
Bryan ‘Birdman’ Williams; cofounded Cash Money Records with brother Ronald and inked $30 million distribution deal with Universal in 1998; affiliated Young Money lineup now includes rappers Lil Wayne and Nicki Minaj. Lyrical boasts (“Richer than the richest!”) are simply not true. Bird has an estimated net worth of $110 million as of September 2011.

5. Curtis “50 Cent” Jackson
Net Worth: $110 million – As of April 2012
Earnings according to Forbes: 2010: $6 million, 2009: $8 million
50 cent has made it to the top five particularly for his business-savvy, as the rapper got a neat nine-figure payout from the sales of Vitamin Water, when it was sold to Coca Cola; spent freely on cars, renovations to the mansion formerly owned by Mike Tyson. Cushion remains from catalog, acting gigs and 50 Cent-themed video games, books, clothes and headphones.

They are rappers, but their business acumen is amazing. From their own headphones, booze, clothing lines, sports teams, record labels and album sales, everything these rappers touch turns to gold.

Although Forbes rating was done using the artistes’ net worth as at April, sources say the year couldn’t have ended with another rating as they believe each of the rappers held on to their spots, raking in more millions though. Except Jay-Z hits a mega deal in the remaining days of the year, P Diddy is surely ending the year as the rapper who made dollars the most.