Matthew Stott, 21, had to be restrained by Blues goalkeeper Joe Hart after he ran up to Ferdinand following Robin van Persie’s winning goal against City. Manchester United won 3-2 at the Etihad stadium. 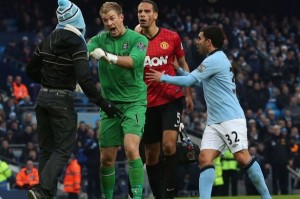 Stott, from Knutsford, was arrested and charged with pitch encroachment during the high-octane game, which also saw Ferdinand struck by a coin thrown from the stands.

Stott, described by his solicitor as “not a stereotypical drunken football fan”, in a statement has apologised to Ferdinand.

But City have confirmed that the fan has had his season ticket removed for the rest of the season and faces a lifetime ban if found guilty in court of a charge of pitch encroachment, despite his apology.

“His season card has been immediately removed for the rest of the season and he has been charged to appear at court. If he is found guilty he faces a lifetime ban,” said a City spokesman.

Speaking through his solicitors, Stott apologised to Ferdinand, saying he was “extremely ashamed” of his actions.

“I would like to apologise to all those affected by my actions, particularly Mr. Ferdinand and the other players,” he said. “I am extremely ashamed of my actions. I have let myself down, my family down, my fellow fans down and Manchester City Football Club down.

“I intend to write personally to Mr. Ferdinand to express my extreme regret and apologies and also apologise to Manchester United and their fans. I would like to thank Joe Hart for his actions when I came on the pitch.”