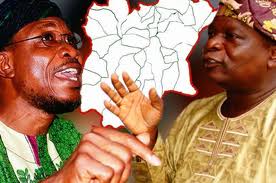 The WOCDIF building reports say has been taken over by the state government.

Speaking while purportedly receiving 750 party supporters who defected from Action Congress of Nigeria (ACN) to the PDP, a claim debunked by the ruling CAN, Oyinlola said the foundation was a non-governmental organisation (NGO) and was funded with private donations.

Mr Basiru Ajibola, the state’s Commissioner for Regional Integration and Special Duties, at a press conference recently however said the centre was built with government money.

Oyinlola argued however that the centre was an initiative of his wife and not a government project.

Oyinlola, who left office in November 2010 after the Court of Appeal in Ibadan pronounced Rauf Aregbesola as the duly-elected governor, said he was yet to get his entitlements.

In a reaction, Mr Kunle Oyatomi, ACN’s Director of Publicity, Research and Strategy, faulted what he called the purported defection of the party’s members to the PDP.

“No true ACN member will leave the party for the PDP,” he said