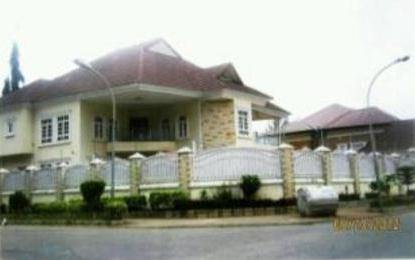 Zamfara state, in north-west Nigeria, is not only one of the least developed states in the country but among states that are not viable but that doesn’t stop the political elite there from plundering her lean resources.

Over 10 years ago, the former governor, Senator Sani Yerima, introduced the Sharia penal code in the state and even went ahead under that law in 2000, to amputate the right wrist of Bello Jangegbe, a man accused of stealing a cow but it turns out the law is for the poor only as both the former and present civilian governors of the state have been accused of hiding under the cloak of Sharia to defraud her.

According to information gathered from a popular site, Linda Ikeji’s blog, the photo (part of which) you see, is the expansive mansion of governor Abdul Aziz Yari (ANPP) which he acquired a few months back and is reportedly worth a whopping N500 million.

The property is situated on Owena Close, off Ethiopia Street, in highbrow Maitama area, Abuja.