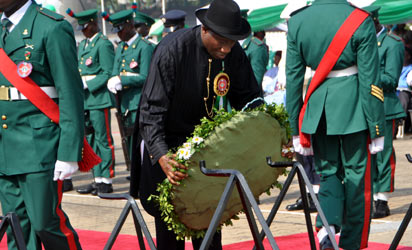 Yesterday, January 15, was the Armed Forces Day, also known as Remembrance Day – a day set aside annually in commemoration of the surrender of Biafran troops to the Federal troops on January 15, 1970 thus signalling the end of the Nigerian Civil War.

To celebrate the day were President Goodluck Jonathan; Vice-President Namadi Sambo; Senate President David Mark; and House of Representatives Speaker Aminu Tambuwal. The colorful event held on Tuesday in Abuja with laying of wreaths at the National Arcade Three Arms Zone, in honour of servicemen who gave their lives fighting for their country.

Others who laid wreaths at the event were the Chief Justice of Nigeria, Justice Aloma Mukhtar; Minister of State for Defence, Chief Olusola Obada; the FCT Minister, Mr. Bala Mohammed; while the Chief of Defence Staff, Admiral Ola Ibrahim,led the other service chiefs; among others.

Other top government functionaries who witnessed the event were House of Representatives Deputy Speaker Emeka Ihedioha; and the Secretary to the Government of the Federation, Chief Pius Anyim.

Minister of State for Defence, Olusola Obada, however, caused a slight scare before the wreath-laying session when she nearly slumped.

Obada who stood between Tambuwal and Ibrahim, was discovered to be going down with her hat off her head. If not for the quick intervention of some security personnel who quickly held her and moved her to a seat, she could have hit the ground.

The minor incident however did not take shine off the event as the minister recovered quick enough to take active part in the ceremony.