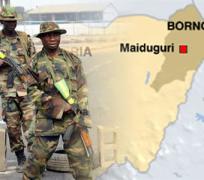 The continued threat posed by radical Islamist sect, Boko Haram, in Borno state has been attributed to the lack of resistance of the people of Maiduguri and its environs to the activities of the sect.

This was disclosed by the military on Tuesday while decrying the attitude of the people of the area.

The military in a statement signed by the spokesman of the Joint Task Force Operation Restore Order in the state, Lt. Col. Sagir Musa, lamented that “unlike in Kano, Birnin Gwari and Rigasa areas of Kaduna State, all these obnoxious and sacrilegious acts elicited not a single passive or active resistance from the locals who in the absence of security agencies were there when the inhuman acts were committed.”

He claimed that: “In an effort to contain crime and criminality, some communities in Nigeria have since devised neighbourhood surveillance and alarm system and other resistance measures to assist themselves and security agencies in combating insecurity in their respective areas.”

Continuing, Musa lamented that “This aspect is totally lacking in Borno State particularly in Maiduguri metropolis and its immediate environs.”

He said: “In view of the above, the JTF wishes to use this opportunity to reiterate the need for local communities to rise to the challenge by pre-empting terrorists act of this nature by way of giving timely and accurate information to security agencies and where possible to actively react to this madness since the Task Force cannot be everywhere at the same time.”

While urging members of the public to pass credible information to the JTF through its frequently advertised lines that are operational at all times, Musa said the task force “is strongly concerned with incessant callous, brutal, barbaric and impious killings of people in some states of the North-eastern part of Nigeria particularly in Borno State. More worrisome is the inhuman way the terrorists perpetrate their dastardly acts ranging from outright shootings, machetting and slaughtering of their victims.”