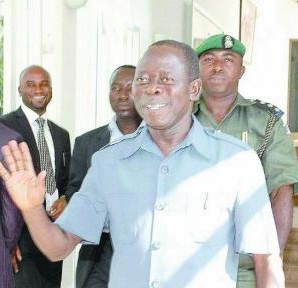 Comrade Adams Oshiomhole of Edo state got a reprieve today when the Supreme Court set aside the ruling of the Appealate court which upheld a petition filed by the governorship candidate of the Peoples’ Democratic Party, PDP, in the last guber polls which challenged the academic qualification of the state governor.

Delivering the lead judgement, Justice Bode Rhodes-Vivour said the appellate court erred in its ruling since the petitioner did not make the issue of qualification a ground in his petition before the tribunal.

He also added that it was a blunder on the part of the petitioner not to make the issue of qualification a ground for challenging the election of Governor Oshiomhole rather than smuggling it through the back door.

The Judge noted that since a petitioner is bound by his petition, there is no ground on which the petition will stand and as such the ruling of the Appeal Court was struck out and the ruling of the tribunal upheld.

Howeverr, in a ruling which might sound as consolation to the defeated PDP candidate in the polls, Major General Charles Airhiavbere (rtd), the court ordered the tribunal to hear paragraph 30 of the petition which sought to disqualify votes in five out of the 18 local government areas in Edo state as a result of alleged electoral malpractice and corruption.