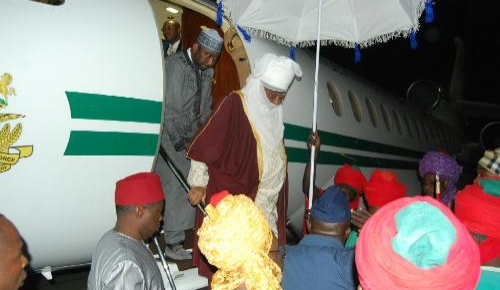 As reported yesterday by Information Nigeria, the Emir of Kano, Alhaji Ado Bayero returned to the ancient city from London aboard a Presidential jet.

The Nigerian Air Force Jet touched down at the Malam Aminu Kano International Airport at about 6.50pm with a large crowd already gathered at the airport to welcome the Emir who was flown abroad for medical treatment along with his sons last month following a daring attack on his convoy by unknown gunmen.

The Emir, looking hale and hearty, acknowledged greetings from well-wishers –which included state government officials, traditional title holders, businessmen and artisans – at the presidential wing of the airport before he and his two sons were conveyed, amid tight security, to his palace.