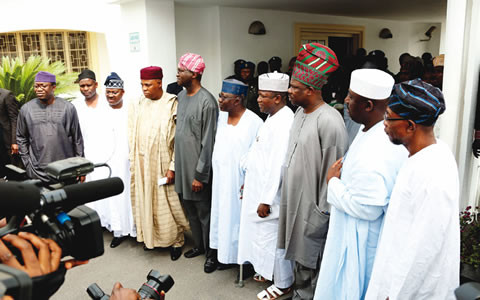 Borno State governor, Alhaji Kashim Shettima, has insisted that the All Progressive Grand Alliance (APGA) was part of the decision of opposition parties in the country to form a strong alliance (All Progressive Change) to wrest power from the ruling Peoples’ Democratic Party (PDP) come 2015, as the party was represented by two governors at the meeting where the decision was taken.

Speaking to newsmen in Maiduguri shortly after returning from the Lagos meeting, Shettima said the members of APGA who were denying the alliance, were economical with the truth as Governor Rochas Okorocha  of Imo State was present at the meeting.

The governor, who insisted that Okorocha was very much involved in the alliance, said: “I wonder why someone will come out to say APGA is not part of the arrangement.”

When asked if it was all about the governors determining the fate of other party members, who may perhaps not agree to the alliance, he said the position of the governors were so important in the issues as elected representatives of their people and the eyes of the parties.

“The governor has a pivotal role to play in the whole process. We are representing our people,” Shettima stated.

Shettima, however, insisted that the decision to form a united party was not motivated by selfish desire of some of them but dictated by the need of the present time, saying, “We are not against any person or individual as the nation is greater than any individual.”