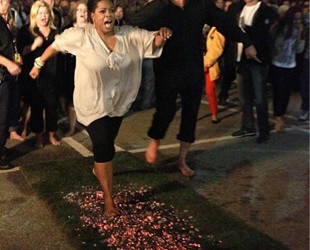 When someone tells you to dosomething stupid do not listen, you willget burned.

At least 21 people have been burned after walking over hot burning coals for the motivational speaker Tony Robbins.

The news media reported that at least three people went to a hospital and most suffered burns of second or third degree.

Robbins hosted a four-day meeting called “Unleashing the Power of Within” in the San Jose Convention Center. Witnesses say that on Thursday, a crowd went to a park where 12 lanes of the hot burning coals were placed on the lawn.

His website promotes Robbins’ “Firewalk Experience” in which people walk on hot coals to bring out their power within.

Fire Captain Reggie Williams said organizers had a permit for a fire and emergency personnel were on alert.