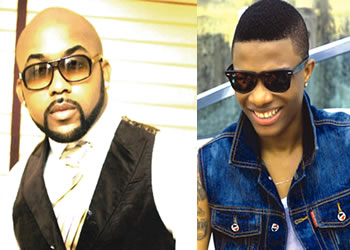 Information Nigeria has learnt that spirited efforts to get Ayo Balogun popularly known as Wizkid, to retrace his steps back to the label that gave him the platform to become the superstar he is today, has shifted to his mum.

According to reports we are monitoring, Banky W supposedly went to Wizkid’s mum seeking her intervention in the crisis as it was becoming clearer that they (EME) were losing their hottest prospect yet.

Banky was said to have reminded her of how he helped propel Wizzy’s career to greatness and being a mother, she reasoned in that direction.

“You know women, she felt compassion for Banky and promised to talk to her son,” a source privy to the trouble-shooting meeting squealed.

Banky, also has not failed in dousing the media speculation that his prodigy has left EME as he described such reports as ‘nothing but rumours’.

He maintained that “Wizkid remains a member of the EME family.”

According to Banky, in response to question on what was wrong between him and Wizkid, “there is no problem that can’t be solved” he said in Lagos during the world press conference organised by COSON at the Protea Hotel, GRA, Ikeja.

For now, it is fingers crossed as we await a peaceful resolution to the management crisis that is rocking what can be described as one of Nigeria’s finest and most successful music label.