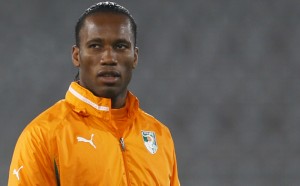 Unlike his national teammate, Emmanuel Eboue, Ivory Coast striker, Didier Drogba has contended that the Super Eagles of Nigeria will be a tough opponent for them to beat in the forthcoming Quarter Final clash between the two teams. Drogba also praised the skill of his former Chelsea teammate and Nigerian midfielder, Mikel Obi.

The Ivorian striker, who scored his first 2013 Afcon goal against the Algerians on Wednesday said, “Against Nigeria, it will be a tough game, against a team that also intends to go far in this tournament… The Super Eagles are a very strong team, very physical. Stephen Keshi has been doing good work, but I hope that Côte d’Ivoire will win and go through, but it will not be easy.”

Drogba also spoke about meeting Mikel [Obi] after he left Chelsea at the end of last season and how he holds the Nigerian midfielder in high esteem: “It is going to be hard and tough, everybody knows how good Mikel [Obi] is, and what he did with Chelsea in the Champions League final… He was one of our best players in that game. But now I will play against him. We are going to laugh before the game, and then it will be tough during the match, but then laugh again after the game because we are good friends. He is my brother.”

The Super Eagles confront the Elephants of Cote d’Ivoire on Sunday in Rustenburg for a place in the semi-finals of the 2013 edition of the Nations Cup. Drogba is not new to scoring against the Nigerian national side as he scored in the last AFCON meeting.