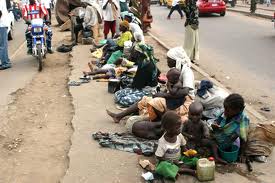 At least 39 beggars have been arraigned by the Lagos State Government at the Special Offences Court in Alausa, Ikeja for soliciting alms.

The suit against the beggars was a renewed drive in the war against begging in the state. The government said the beggars constituted public nuisance, adding that it would no longer be business as usual as any beggar found on the streets of Lagos would be prosecuted.

Lagos State Attorney-General and Commissioner for Justice, Mr. Ade Ipaye, was the prosecutor in the case. He was represented by a lawyer in the ministry. Their charge sheet said the beggars were parading themselves as disorderly persons without viable means of livelihood, thereby committing an offence under the criminal law of Lagos State. They were also accused of conducting themselves in a manner likely to cause breach of peace as well as for receiving unauthorised levy from persons and thus committed offence punishable under the law on illegal collection of dues in public places.

Meanwhile, the 39 beggars pleaded guilty to the offences and were consequently remanded in Kirikiri and Badagry Prisons. However, nine of them were then taken to the state Rehabilitation Home, Majidun, Ikorodu as a result of their disabilities.