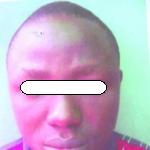 The Nigerian police have arrested a man, Mr. Godstime Esonoye, for chaining his daughter’s legs at Idimu, a suburb of Lagos, Nigeria’s commercial capital for one weekand denying her of food.

Esonoye allegedly chained and tortured his 10-year old daughter at their 5, Olorunlori street, for one week without food and water.

The little girl, who is living withEsonoye and her step-mother, lost her own mother two years ago.

The father allegedly chained her to compel her to confess to wi*tchcraft.

The victim has been taken to the Emergency ward at Igando General Hospital for treatment of the injuries she sustained while she was chained.

Angry neighbours have called on relevant authorities to ensure that the man is pun*shed for subjecting the little girl to such inhuman treatment, and that the girl should not be left with the man after her treatment in the hospital.