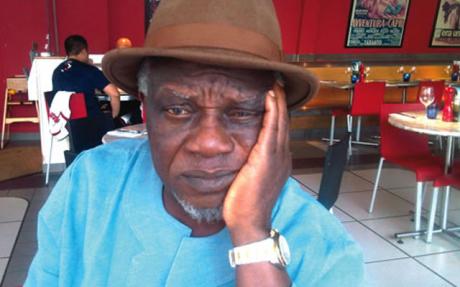 Reactions have continued to trail the demise of Justus Esiri who passed on to the great beyond late Tuesday night.

The president, Actors Guild of Nigeria, AGN, Miss Ibinabo Fiberesima while confirming the death of the late veteran thespian in a statement, said:

“We regret to announce the passing away of our member and veteran actor, Justus Esiri who died last night [Tuesday]. He was said to have died of complications resulting from diabetes at a hospital in Lagos.”

“Declared as one of the strong men of the African film industry, Justus Esiri is widely known for his role in the now rested popular TV series, The Village Headmaster. We commiserate with the family and pray that God gives us the fortitude to bear the irreparable loss.”

In his own reaction, former AGN president, Mr. Ejike Aseigbu described Justus Esiri as “one of the best actors this country has ever produced.”

Another ex-president of the guild, Segun Arinze said, “It is so bad. Uncle Justus Esiri was a figure and a great motivator to us. He left a legacy that needs to be sustained. Justus Esiri contributed his quota to the growth of the industry. It is a very bad news, we will miss him.”

Actress Monalisa Chinda, who expressed shock when she heard of Esiri’s death, said, “I don’t really know what to say at the moment. I am totally devastated.”

The late Justus Esiri was born in November 1942 in Delta State and was married to Omiete and they have six children including popular singer/rapper, Dr. Sid.