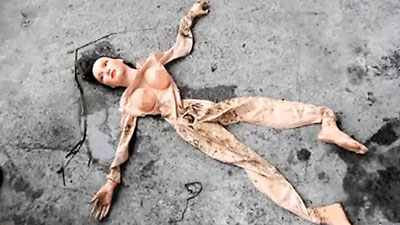 Police in Shandong Province, China, received calls that were reporting that a woman’s body is floating in the nearby river.

A team 18 of police officers, medical workers and firefighters rushed to the scene as the drama unfolded.

They worked frantically for almost an hour to rescue what they thought was a woman drowning, the news media reported.

Hundreds of people had gathered to watch the heroic rescue.
Police stopped traffic so that the ambulance can rush the woman to the hospital as soon as she is rescued.

But when officers finally managed to bring the drowning woman to shore, they were shocked and disappointed to discover it was an inflatable sex doll.

Mothers reportedly quickly covered their children’s faces and hurried them away from the scene, before their kids could ask awkward questions.

A while ago, a Chinese TV reporter was left mortified after she mistakenly reported the find of a rare mushroom that was discovered by villagers from Liucunbu, a rural community outside the western Chinese city of Xi’an, while drilling a new well shaft, only to find out later that it was a rubber sex toy.