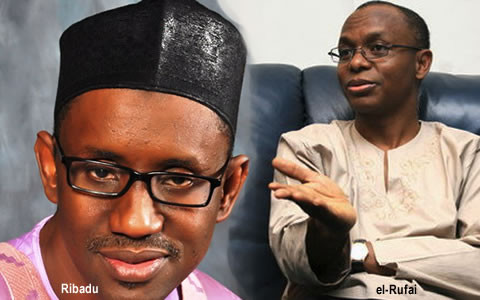 In an interview with an Abuja-based newspaper, Blueprint, Ribadu fell short of referring to el-Rufai as a know-it-all because according to him, the former minister was never a member of staff of the commission and so knew nothing about its operations to have written about them (EFCC) in his book.

Admitting that he had yet to read the book, Ribadu also stated that el-Rufai did not inform him he was writing a book and never interviewed him about what he wanted to write.

“So, I am quite surprised on how you can quote a person that you have not interviewed. I think the ethics of writing is that you quote somebody with authority and that you can stand by that” he said.

“I have not fully read the book but I have seen a couple of things coming out of it including the excerpts from the media. The most important thing I will say about it is that Nasiru did not tell me he was writing the book, not to talk of showing me the script. Nasiru never interviewed me for his book.

“There is a huge integrity deficiency bordering on ethics if you can quote somebody without first having to record him and you have proof of that. He didn’t consult me, he didn’t give me anything to look at and therefore just like you and all Nigerians, I was quite surprised to see him quoting me directly in the book.”

Ribadu added, “Nasiru was not a staff of the EFCC. I wonder how he could report about the work of the EFCC when he was never part of it, just as I will not talk of the FCT when he was minister. He didn’t know of the works of the EFCC and he couldn’t have known. He was not privy to all the things that we were doing there.

“He did not also show me what he was writing because, as I said earlier, even if you discussed something with someone before, when you are putting it into a book, it is only proper for you to validate it and crosscheck with him. Even if he agrees or disagrees, at least it makes sense. This is especially when the person is close to you because that would be an opportunity for the person to correct you.”