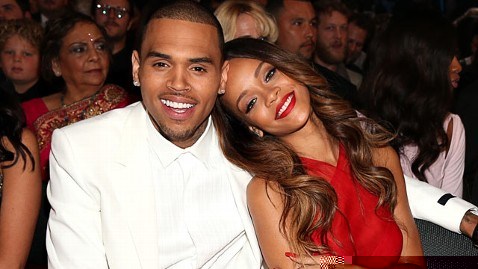 Rihanna reportedly wants Chris Brown to ‘man up’ and ask her to marry him.

The singer confirmed she has rekindled her romance with ex-boyfriend Chris by attending a series of public events with him recently. At the Grammy Awards, they hugged and joked during the ceremony, while she accompanied him to a court probation hearing earlier this month. Rihanna has made no secret of her feelings for Chris and wants him to show the world he is equally serious about her.

‘As far as Rihanna is concerned, it’s now time for Chris to man up and be supportive of her,’ a source told British magazine Closer. ‘She’d love to see him make a firm commitment and make it clear to everyone ‘ especially his ex, Karrueche Tran ‘ that he’s all about her now, by proposing.’

Although Rihanna appeared calm and collected as she attended Chris’ recent court hearing, insiders insist it took a lot out of her. Prosecutors have accused Chris of submitting fraudulent documents logging court-ordered community service hours following his 2009 conviction for assaulting Rihanna.

‘Even though she just put on a brave face, she was taking really deep breaths and even shaking a little. She had mixed emotions about it,’ an insider revealed. ‘On one hand, she felt it was a big step for her and Chris. But she was also confronting all those horrible memories that came to the surface again.’

It has been claimed that Chris and Rihanna had a heated exchange shortly before Chris’ court appearance. The hip-hop star was worried that the hearing could prove too much for Rihanna, but she was adamant about showing her support.

‘There was a tearful stand-off between them, just minutes before the hearing started,’ a source added. ‘Chris told her that she didn’t have to go in, but Rihanna grabbed Chris and said really loudly, ‘I’m going in because you’ve changed.’ They didn’t seem to care who was watching.’