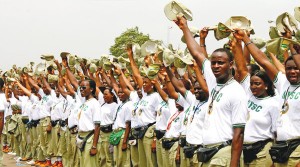 President Goodluck Jonathan has said that the Federal Government, under an arrangement with United Nations Development Programme (UNDP), will recruit young professionals that will work on a variety of UN programmes in various parts of the world.

Speaking at the passing out parade of Batch A corps members of the National Youth Service Corps in Lagos said this would expose the youths and make them serve as Nigerian ambassadors not only in the international civil service, but also in several other ways.

According to him, those who will be privileged to get the job are those who have acquired professional skills. He therefore urged corps members to reduce the level of unemployment in the country by engaging in skills acquisition programmes.

Represented by Dr Wale Ahmed, Commissioner for Special Duties and Chairman, NYSC Governing Board, Jonathan said his administration remains focused on youth empowerment, which will be pursued, using the platforms of the various employment programmes.

“The NYSC scheme has over the years contributed immensely to the growth and development of our country. Apart from fostering national unity and integration, the scheme has become a veritable tool for the implementation of very important national developmental programmes,” he said.

“This administration remains resolute in tackling the issues of insecurity and corruption headlong to ensure that there is a conducive atmosphere for sustainable economic growth that will result in the greater Nigeria we all dream and hope for.”

In her farewell address during the 2012 Batch ‘A’ NYSC passing out ceremony at Iyana-Ipaja Orientation Camp, the State Coordinator, NYSC, Lagos, Mrs Adenike Adeyemi said that out of 4,528 corps members in batch ‘A’, five lost their lives while 28 of them are to face disciplinary actions.

She explained that the purpose of the disciplinary actions was to serve as a deterrent to incoming corps members who will not live by rules and regulations that guide the scheme.