Three South Korean doctors have been killed in the north-eastern Nigerian state of Yobe, officials say.

Residents said they were killed during the night in the town of Potiskum. Two of them had their throats slit while the third was beheaded, they added.
Officials said the victims had been working at a government-run hospital. 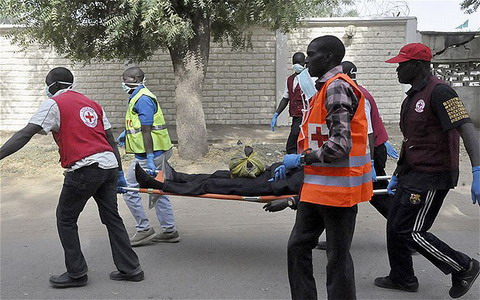 No-one has said they were behind the attack, but it happened in an area where the Islamist militant group, Boko Haram, has been active in recent years.

More than 600 people were believed to have been killed in 2012 by the group, which is fighting to overthrow the government and create an Islamic state in Nigeria’s predominantly Muslim north.

Yobo state police commissioner Sanusi Rufai said it was nevertheless too early to know who was behind the attack, which happened either late on Saturday or before dawn on Sunday. Police have begun an investigation.

The victims were reportedly found inside their flat on Sunday morning, after people became worried that they were not answering the door.

An official at the General Hospital in Potiskum told the Associated Press that the victims were South Korean and had worked there.

He added that their block of flats had no security guards, and that they had routinely travelled through the town in taxis without a police escort.

However, several residents told AFP that the doctors were Chinese nationals who had been employed by the state ministry of health for about a year. Mr Rufai also said they were from China.

On Friday, nine polio vaccination workers – all said to have been women – were shot dead in northern Nigeria. Some were killed in Kano, others at a health centre in Hotoro, outside the city.

President Goodluck Jonathan condemned the killings, for which no group has claimed responsibility, and vowed that the campaign to eradicate polio would be carried through to a successful conclusion.