Home Uncategorized We Signed an Agreement that Jonathan would Serve only One Term of...
Facebook
Twitter
WhatsApp 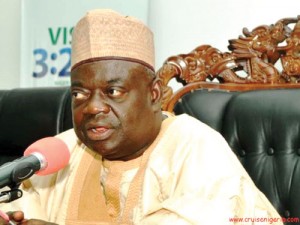 It will be recalled that sometimes around the 2011 elections, there were allegations that President Goodluck Jonathan agreed with northern governors of Peoples Democratic Party (PDP) not to contest the 2015 presidential election.

More information about the supposed agreement emerged recently when the Vanguard reported that Alhaji Tanko Yakassi, one of the leading members of the Northern Political Leaders Forum (NPLF) said that an attempt by the forum to get the president to concede the 2015 presidential ticket to the north failed after two meetings. However, despite Yakassi’s assertion, other northern opinion leaders are pointing to President Olusegun Obasanjo’s claim on the final day of PDP campaigns where he was quoted as saying that President Jonathan would serve one term.

However, in a rather controversial disclosure, Governor Aliyu of Niger State had, in a radio interview on Saturday, claimed that the president reached an agreement not to contest the 2015 presidential election. He said: “I recall that at the time he was going to declare for the 2011 election, all PDP governors were brought together to ensure that we were all in the same frame of mind… And I recall that some of us said that, given the circumstances of the death of President Umaru Yar’Adua and given the PDP zoning arrangement, it was expected that the North was to produce the president for a given number of years.

“I recall that at that discussion, it was agreed that Jonathan would serve only one term of four years and we all signed the agreement. Even when Jonathan went to Kampala, in Uganda, he also said he was going to serve a single term.”