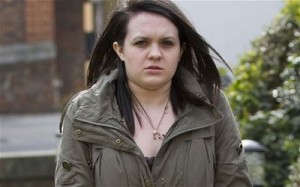 Justine McNally (on the photo) fooled the 16-year-old and her family and friends with her disguise as a “Goth” called Scott, and she was welcomed into their home. She then lured her into intimate encounters, promising her marriage and children.
Jailing her for three years, Judge James Patrick said: “She had her first sexual experience with you, and you abused her trust so badly she finds it difficult to trust other people”.
“It was selfish and callous behaviour – a grave abuse of trust of her, her family and friends through your behaviour over a period of years.”
The deception was so successful that the girl believed she had lost her virginity to “Scott”. But her secret identity was exposed when a sex toy was found in her bag.
Prosecutor David Markham described it as “an extraordinary case” in which sexual consent was obtained “by fraud”.
The couple began their relationship after meeting through an online videogame when they were 12 and 13.
They eventually met in March 2011, when McNally, posing as Scott, visited the girl in north London, staying with a friend of her family.
They had talked about having sex during MSN webchats and in video calls, and the relationship turned physical immediately.
But initially McNally refused to remove her clothes, claiming that she simply wanted to please her lover. Eventually the teenager was deceived into believing that they had attempted to have sex, the court heard.
She believed they were girlfriend and boyfriend. “They talked about getting married and having children in the future”, Mr Markham said.
McNally was almost exposed when she broke up with another girl who she had been dating in her home town, Glasgow.
The spurned woman got in touch with her rival in north London, and made a comment about “Scott” being a girl.
But when confronted McNally lied her way out of the situation.
Eventually, in November 2011, a family friend of the victim became suspicious and looked through McNally’s possessions.
“The friend found a bra, a size 12 River Island top, and as she was talking (to the girl’s mother) she found a strap on penis in the bag”, said Mr Markham.
The mother and daughter confronted McNally, who produced a picture on Facebook of her dressed in pink clothing and heels, and said she wanted to have a sex change to continue the relationship.
Mr Markham said the victim was “literally sickened”, and ended the relationship and called police.
“What should be an exciting era in her life has been darkened by what has been done to her,” said Mr Markham.
“She feels completely bereft and besieged with self-doubt.”
McNally, who admitted six counts of sexual assault, will be on the Sex Offenders’ Register for life and is banned from contact the victim or her mother.
Naij