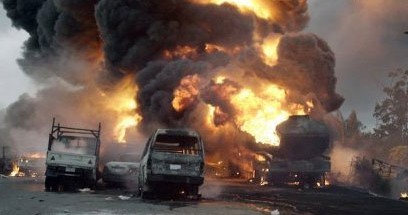 BUK road in Kano State was earlier today thrown into panic when two tankers collided leading to an explosion that killed at least four persons.

The explosion which according to eyewitnesses, occurred at about 6am on Monday, was suspected to have been caused by brake failure of one of the tankers which collided with the one in front leading to an explosion and death of at least 4 people who were on board the tankers.

Earlier, people in the environs erroneously credited the explosion to a bomb planted by the Boko Haram insurgent group which caused a stampede that left several people injured as they made to run for dear life.

The fire has however been brought under control and the road has been reopened.