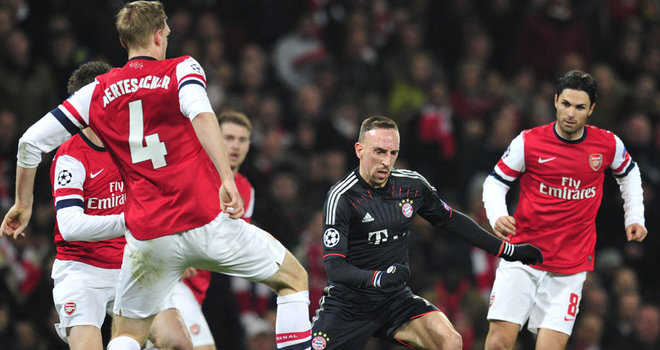 Franck Ribery will miss the action of a return leg match between his club Bayern Munich and Arsenal on Wednesday in a final round of 16 Champions League tie.

The winger strained ligaments in his left ankle on Saturday in a Bundesliga between B. Munich and Fortuna Dusseldorf – the Jupp Heynckes’ tutored side emerged victorious 3-2 and bagged their 11th consecutive win in the process.

Bayern have a 3-1 advantage from the first leg played in North London and a draw will be just enough to see them through to the last eight while Arsenal need to fight tooth and nail to score at least three unreplied goals to see their slim chances of qualification come true.

No side has managed that this season against Heynckes’ team although the manager must also do without the suspended Jerome Boateng and Bastian Schweinsteiger.

Also a doubt is Arjen Robben – a natural replacement for Ribery – who was missing at the weekend with a calf problem.

The all important clash will take place on Wednesday at the Allianz Arena.