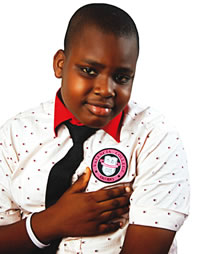 A JSS 1 pupil of Valencia College, Ibadan, Oyo State, has done his school proud by becoming one of the youngest kids that have obtained the Microsoft Certified Professional certificate, SEGUN OLUGBILE reports

A 10-year-old pupil, Seyi-Ojo Anjolaoluwa, has emerged the youngest Nigerian Microsoft certified professional and one of the youngest people in the world to attain such feat.

Born on July 21, 2002 to the family of Dr and Mrs Anjolaoluwa, the chubby boy participated in the MCIP test on July 24, 2012. He scored 869 out of possible 1,000. Due to his performance, he was adjudged by Microsoft as a certified professional in Microsoft Windows XP (Administration Management and Configuration, Exam 70 – 270).

Though their performance was not as high as Anjolaoluwwa, some Nigerian children, which include Nwaiwo Favour of Royal Family Academy, Abuja; and Osaremen Davidson and Olanrewaju Shittu, both of Doregos Private Academy, Lagos are also in the good book of Microsoft Incorporation for their enviable performances in the certified examination.

Microsoft Certified Professional is an internationally recognised certification programme provided by Microsoft cooperation. The certification is tailored towards building skills on Microsoft business solutions, focusing on client-end operating systems such as windows XP, Vista, Windows7 among others.

Though he was not the only pupil registered by his school for the professional certification examination, the boy’s performance placed him shoulder higher than his five other school mates.

Rather than pursue a career in information technology, he said his aspiration was to become a medical doctor. His mission in life is to make his school and country proud.

The Head of Training for ITS, an Ibadan-based IT company in charge of the ICT section of Valencia College, Mr. Oresanya Joshua, commended the efforts of Anjolaoluwa and the other five pupils, saying they should be celebrated.

“The kids deserve to be celebrated,” he said.

This, he said, would not only enhance the sustenance of the gains that the country has made in information technology, it would also help the nation to discover ICT gurus in its school system.

He added that his company has been in the vanguard of efforts to integrate information Technology Training Curricula into Nigerian schools from primary to tertiary levels. Oresanya added that schools should be encouraged to take the teaching of ICT seriously.

“Schools should be encouraged to embrace ICT because some schools still teach computer studies the same way they teach social studies without exposing the kids to practicals. If not for Anjolaoluwa and the other pupils that excelled in the Microsoft Professional Certification test, we would not have known that ICT gurus are within us,” he said.

The school Principal, Mrs Victoria Morakinyo, also applauded Anjolaoluwa and the other pupils who made the school, the country and Africa proud.

She added that they thrived in the examination because of the state-of-the-art facilities available in the college as well as the employment of expert and quality teachers that deliver qualitative education to pupils.

The principal, however, commended Anjolaoluwa and other five pupils that sat for and passed the certification examination.

They also came out in flying colours and were certified.

For the ICT savvy pupils, it was just the beginning of their career as they promised to explore other areas of ICT certification so as to match their counterparts in the developed world.

With the skill acquired from this certification, these young Nigerians stand the chance of securing high paying holiday jobs as system administrators, help desk support analyst or as system engineer. This qualification places them on a higher pedestal when compared with pupils of their age or class.

Morakinyo said that with this feat, the college could arguably be classified as the fist secondary school in the country to produce six Microsoft Office Specialist pupils within a year.