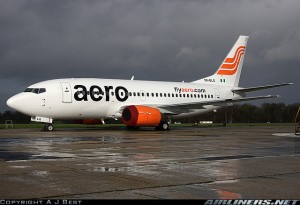 The Lagos division of National Industrial Court, Lagos Division, yesterday, restrained the management of Aero Contractors Airlines from sacking any of its striking workers.

The airline purportedly sacked more than 600 workers last Monday; a day the airline was supposed to resume flight operations after the Minister of Labour mediated and brokered a truce between the management and the striking workers.

According to the court, since a verdict is yet to be reached on the case, it would be wrong for the management to issue sack letters to the striking workers.

The court who said both parties should maintain status quo pending its decision and adjoined the case till May 8.

Meanwhile, the workers have been advised to resume work. Addressing the workers at the secretariat of the National Union of Air Transport Employees, NUATE, Lagos, President of Air Transport Senior Staff Services Association of Nigeria, ATSSSAN, Benjamin Okewu enjoined the workers to go about their duties lawfully without resorting to violence.

Okewu added that if they were restrained from resuming at their duty posts, the unions would then take up the matter.

You’d recall that Aero went to court and got an injunction restraining the workers from disrupting the operations of the airline after more than two weeks of fruitless negotiations between both parties. Aero Airline flight operations have been suspended since Monday, when the workers barricaded the offices and terminal tickets counters of the airline, forcing the airline to go through recertification to resume flight operations, as it is the standard practice in aviation if an airline fails to fly for more than a week.