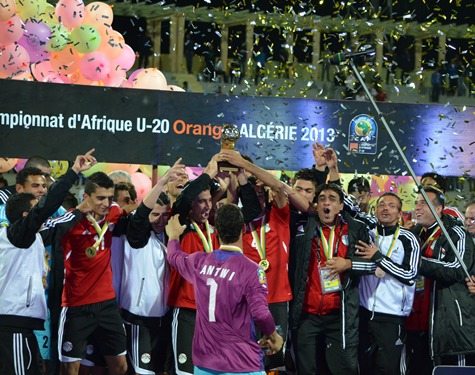 Egypt beat Ghana 5-4 on penalties to be crowned African Youth Champions in a thrilling encounter on Saturday night after it finished 1-1 in regulation time.

The Young Pharoahs have now won their fourth U-20 African Championship title, one better than the West Africans.

The North Africans signaled their intent after just four minutes from a penalty when Saleh Gomaa slotted. But it took just three minutes for Ghana to strike back, after another penalty went the Satellites’ way.

And Jeremiah Arkoful stepped up to confidently convert the spot kick.

During penalties, Nketiah started off on a good note for Ghana and the team converted their spotkicks except for those from Michael Anaba and Asuah.

Egypt looked likely to lose when captain Rami Rabiea missed his spotkick but scored the last four; with Hossam Ghaly converting the winner.

With the victory, the Young Pharaohs won all their games en route to the final  conceding just one goal in the process while Ghana lost just once; against Egypt.