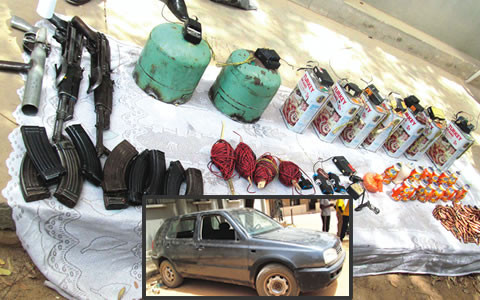 Three suspected bomb factories in Sharada, Gaida Ajawa on the Eastern Bye-pass and Mariri, have been discovered by security operatives in Kano just as a large consignment of arms and ammunition has also been impounded. Three members of the Islamic Extremist group were arrested.

The spokesman of the Joint Task Force (JTF), Captain Ikedichi Iweha, in a press statement in Kano yesterday, said that the three buildings, which were found in three separate raids, were demolished, adding that they served as bomb factories for the terrorist group.

Among those arrested, he disclosed, was the sect’s bomb making specialist, who was nabbed at the Farm Centre.

Captain Iweha reiterated the JTF’s resolve to stamp out every form of terrorism from Kano state and warned that anyone found to be harbouring terrorists would be treated as an accomplice and their properties pulled down.

He again appealed for the cooperation of Kano residents in the war against terrorism by obliging useful information and other vital clues to the Task Force.