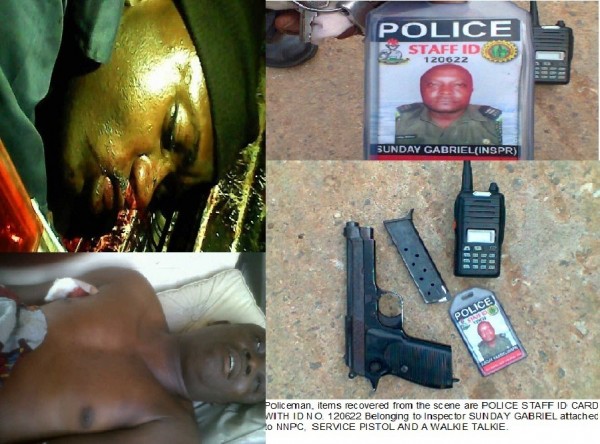 The Police in Lagos have forced Olanrenju Gbedeogun, an officer of the Nigeria Security and Civil Defence Corps (NSCDC), to make a statement that exonerates the police from the attack that led to the death of two officers of the corps as well as led to the escape of some oil pipeline vandals.

It was learnt that in a frantic bid to cover their tracks and back-up their claim to the presidency that it was officers of NSCDC which attacked the police, and that the police knew nothing about the death of the two NSCDC men, the police in Lagos has subjected Gbedeogun to severe torture reportedly supervised by the Lagos State Commissioner of Police where a videotaped confession is said to have been obtained.

A police officer at the Owutu Police Station who felt bad about the latest developments told us on condition of anonymity that if care was not taken urgently Gbedeogun would be dead before daybreak. By that time, the torture victim had already spent over 24hrs in detention, contrary to the law. This is even as the IG of Police Mr Mohammed Abubakar yesterday ordered the unconditional and immediate release of all NSCDC officials in custody.

Gbedeogun was one of the NSCDC officers that escaped from the vandalization scene where the police killed two of his colleagues. He was found where he was hiding for fear of his life, and arrested by the police.

Our source said that in forcing the confession out of him, the police reminded Gbedeogun of the case in Edo State of Olaitan Oyerinde, Governor Adams Oshiomole’s former aide who was allegedly killed by the police last year, suggesting that a similar fate could be his if he failed to cooperate with them.