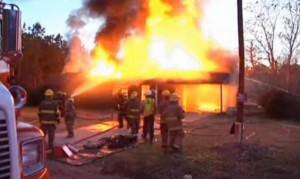 A Texas woman burned her own house down during a heated battle with a snake.

The serpent frightened the lady while cleaning outside her home Wednesday night. She doused the limbless reptile in gasoline and called over her son to set it ablaze.

Her son tossed a lit match at the creeping reptile but it slithered into a nearby brush pile, bringing the flames with it. The brush pile, too, caught fire and soon spread to the family’s home on Will Smith Rd. in Texarkana, Capt. David Grable of the Bowie County Sheriff’s Department confirmed to the Daily News.

“We were trying to kill a snake with fire,” the woman said during a 911 call. “It done caught the house.”

“Caught the house?” asked the dispatcher.

“Yes, the house is on fire. Could you hurry up please?”

The Liberty Eylau Fire Department arrived at the scene to find the family’s home completed destroyed and a neighbors’ home significantly damaged.

“There were two homes close together. One of them is a total loss,” said Jeff Neal, chief deputy at the sheriff’s office.

“With rabbits and big field mice, once they start burning the grass they get out of their hole,” said Wesslehoft. “They have been known to catch on fire and take off.”