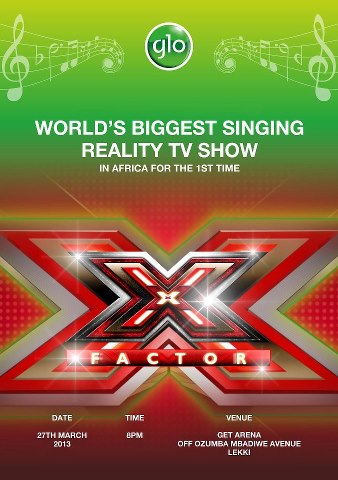 The world’s number one music singing talent reality television show, “The X Factor”, has berthed in Africa for the first time and where else but in Nigeria; courtesy one of the leading telecommunications company, Globacom.

The show was unveiled during the week at the GET Arena, Lekki, Lagos, confirming Globacom as the leading force that connects the youth to their entertainment passion.

The ultimate winner of the spectacular show will cart home a princely sum of $150,000 (N24million), the biggest purse among current reality TV shows as well as a recording contract with the internationally acclaimed Sony Music for the recording of an album and professional management of the winning individual or group.

“Africa has been yearning for a programme of this optimum quality and we are privileged to have made it possible,” Bello enthused.

He added that Glo needed to do something special to mark the special year of its 10th anniversary, hence the gift of “The X Factor” to entertain and delight its teeming subscribers across sub-Sahara Africa and the larger public.