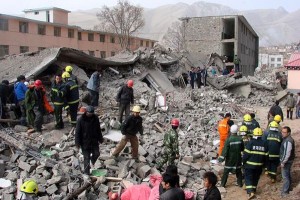 The earthquake, which set off landslides and destroyed buildings, occurred close to where a big earthquake killed almost 70,000 people in 2008. It was followed by several aftershocks.

President Xi Jinping and Premier Li Keqiang said all efforts must be put into rescuing victims to limit the death toll.

6,000 troops have therefore been sent by the Chinese government to Sichuan region, officials said.

Li was on his way to Ya’an, state media said.

“The current most urgent issue is grasping the first 24 hours since the quake’s occurrence, the golden time for saving lives,” Xinhua quoted Li as saying.

Xinhua said 6,000 troops were heading to the area to help with rescue efforts.

State television CCTV said only emergency vehicles were being allowed into Ya’an, though Chengdu airport had reopened.

Most of the deaths were concentrated in Lushan, where water and electricity were cut off.

Local seismologists registered the quake at magnitude 7.0 while the US Geological Survey gave it as 6.6 at a depth of 12km. It was followed by several aftershocks.

Rescue workers heading for the quake zone were struggling to clear roads that had been blocked by debris, CCTV reported.

The military set up a relief and rescue headquarters and medical relief team for the quake-hit region.

Hard-hit parts of the county remained unreachable by road and phone services were cut off, but some text and internet services worked, state media said.