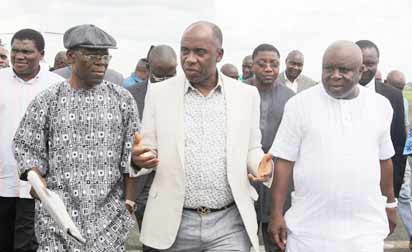 Embattled chairman of the Rivers State chapter of the Peoples Democratic Party (PDP), Chief Godpower Ake, has revealed that the crisis currently rocking the party was part of a grand ploy to destroy Governor Rotimi Amaechi’s structure and the state government.

Ake, who was ousted by a Federal High Court sitting in Abuja, accused the Minister of State for Education, Chief Nyesom Wike, and other top politicians of being behind the crisis.

He made this known while receiving some chairmen of Local Government Councils who paid him a solidarity visit at his Port Harcourt residence.

“What the detractors are doing is best known to them. It is disheartening for people to build a house and turn round to destroy it. Wike is however not alone in the fight against Amaechi. There are others at the top conspiring to destroy Amaechi’s structure. The party is actually not the target but the Rivers State Government,” he said.

He decried the court ruling which sacked him from office but called on party members to remain calm.

Chairman of ALGON and Mayor of Port Harcourt, Chimbiko Akaralo, who led the delegation expressed concern with happenings in the party.

He said, “We are here to register our solidarity as members of Peoples Democratic Party (PDP) and the Association of Local Governments of Nigeria (ALGON), with you as the Chairman of the PDP in Rivers State. We are very much concerned about the issue at stake in Rivers State.

“As concerned PDP members, we frown against the unbecoming activities of disgruntled elements within the party who are bent on derailing the party.”