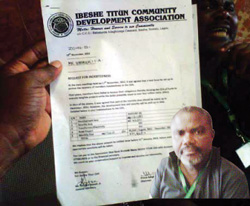 Chief Asuquo Umoren has raised the alarm over a plan by some members of his community to kill him.

Umoren, a landlord at Umoren Street, accused some executive members of Ibeshe Titun Community Development Association of being the brain behind the plot, as he said his ordeal began when he exposed some shady deals being perpetrated by the CDA executive.

Umoren who was once the Public Relations Officer of the CDA said he left his position because his conscience could not bear extortion.

After falling out with the executive, there had been many threats to his life and that of his family members.

According to Umoren, his offence was telling the executive that the way the CDA was being run without recourse to accountability was wrong.

He alleged that on one occasion, the executive arranged some thugs in the name of a task force, invaded his house and beat him. He added that the task force also vandalised his property and cut off power supply to his building.

“When people enquired what I did, they said I owed the CDA some money and that I was inciting the people against the association,” Umoren said.

Although Umoren admitted owing some community levies, but he said he refused to pay because he was not convinced of what they were going to do with it.

“They told me they would make life miserable for me in the community. They said someone from Akwa Ibom State could not dictate to them how a CDA in Lagos should be run,” Umoren alleged.

“They said I should leave the area and that if I failed to leave, I would have myself to blame.

“Since that time, I have been wandering like a homeless person. The lives of my family are now in jeopardy. I hereby appeal to people of good conscience to come to my rescue as they are boasting to take my life.”

Joseph on Wednesday said the people he called thugs were members of the community, adding that Umoren owed the community, and when the notice for all debtors in the community to fulfill their obligations to the CDA expired, he (Umoren) refused to pay and that was why the task force disconnected his power supply to prompt him to pay.

He also said members of the CDA were not after his life as he alleged and had no intention of doing so.

“Umoren’s allegations of extortion by CDA are nonsense. Every resident pays monthly fee of N150. Of the amount, N100 is for the running of the secretariat while the remaining N50 is set aside for people’s welfare. For instance, if a member of the community loses their loved ones, we use that to assist them.

“Because of people like him (Umoren), we have not been able to engage security guards for the area.

“We also collect CDA levy from people newly moving into the area. This is done because most of the electricity poles in the area were bought by the CDA and we therefore do so to recoup money we have spent.

“On the aspect of accountability, we have been in office for just 16 months. It was the people that handed over to us who had some issues with the financial records they left,” Joseph said