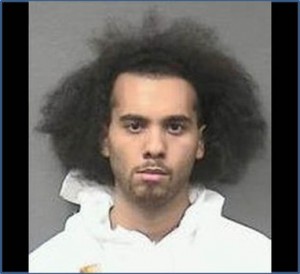 Douglas M. Foster, 26, of Houston, Texas is facing a felony charge of super-aggravated sexual assault of a child under 6 years of age, the Houston Chronicle reported today.

Police in Houston arrested the man and say that Foster sexually assaulted the 2-year-old daughter of his girlfriend while he was babysitting the toddler.

Foster was being held today at the Harris County Jail where he has been denied bail.

The girl’s mother told police that she left the child with Foster about 8 a.m. Tuesday, and he called her about 4 p.m. to say that the child was bleeding “where she ain’t supposed to be,” according to an arrest warrant filed in the case. at life in prison without the possibility of parole.

By the time the mom got back to Foster’s home where he was babysitting, she “found him wiping the girl’s private parts.”

The mother asked Foster why the child was bleeding to which he responded that he didn’t know.

The mom gathered her own evidence at the scene, placing bloody tissues into a bag and then taking her daughter to the hospital.

According to Foster’s arrest warrant, a forensic nurse at the hospital told the Houston PD that the child’s injuries were “consistent with vaginal penetration.”

Investigators are saying that the injuries to the 2-year-old girl are so severe that the little girl will need surgery.

If found guilty of the felony charge of super-aggravated sexual assault of a child under 6 years of age, Douglas M. Foster could be looking at life in prison without the possibility of parole.