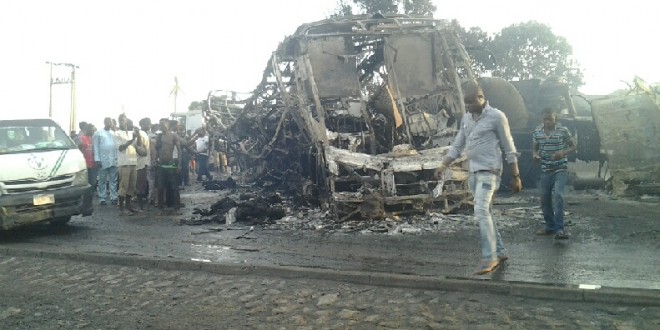 Dead victims of the accident that occurred at Ugbogui along Benin-Lagos road on Friday might be given a mass burial if their identities can not be ascertained. Many of them were burnt to ashes.

The luxurious bus they were travelling in was engulfed in fire after a tanker that was hit by a trailer carrying cement exploded and only three passengers managed to escape with severe burns. Witnesses said the luxurious bus was filled with passengers.

The remains of the victims have been deposited at the University of Benin Teaching Hospital mortuary while it was gathered that the police authorities were waiting for directives from Abuja on what to do with corpses.

State Police Commissioner, Folusho Adebanjo said relatives have started showing up to collect corpses of their love ones.

He said time would be given for relatives to identify corpses and added that the manifest showed that 36 persons died in the fire.

An official of the FRSC said they would soon remove the vehicles from the highway to ease traffic movement.

Owners of the shops, vehicles and motor-cycles affected by the fire have demanded for compensation from owners of the tanker that caused the fire.