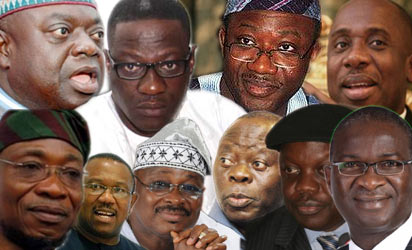 The Presidency has taken its battle with Rivers State Governor Rotimi Amaechi  to the Nigerian Governors’ Forum where it has initiated subtle moves to ensure he does not retain his post as Chairman of the Forum.

To finalise plans for the onslaught against the embattled Amaechi ahead of the fifth meeting of the NGF slated for Wednesday, the Presidency invited 15 state governors to a meeting with President Goodluck Jonathan on Sunday night in Abuja.

Godswill Akpabio of Akwa Ibom State and Chairman of the PDP Governors’ Forum led the delegation which had  Governor Peter Obi of Anambra State as the only non-PDP governor in attendance.

A  source privy to the meeting revealed that the  Forum which  was preceded by a special dinner was “essentially to mobilise support for the emergence of Katsina State Governor Ibrahim Shema  as the next chairman of the NGF.”

He said, “We have been able to secure the understanding of our governors especially our brothers from the North. I believe for  the sake of  balance,  it makes a lot of sense to have a northern PDP governor as chairman of the NGF  because we already have Governor Akpabio, a Southerner   as chairman of the PDP Governors’ Forum.”

Meanwhile, a reliable source in Rivers State Government House, Port Harcourt who spoke on condition of anonymity, revealed that Amaechi was keen on seeking re-election as the forum’s chairman.

The source stated, “I can tell you that the governor will not be stampeded into quitting. He will prefer to   stand the election and be defeated than shying away from it because some outsiders are now interested in displacing him. Mind you, Governor Amaechi is a good fighter”, he noted.