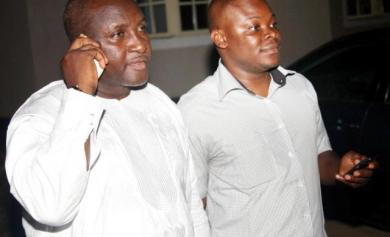 Two journalists of LEADERSHIP Newspapers Group have been detained by the Police again one week after they were first detained at the Force Headquarters following a story this newspaper published on a “presidential directive” to attack key opposition political parties’ leaders.

Mr. Tony Amoekedo and Chibuzo Ukaibe, the Group News Editor and Correspondent of Leadership respectively, both reported at the force Headquarters earlier today, as instructed but were detained on arrival.

It would be recalled that upon their release last week Tuesday, they were asked to report at the Force Headquarters daily for further investigation.

Although the police hasn’t offered explanation for the detention, Information Nigeria learnt that Amoekedo and Ukaibe have been moved to the Tracking Unit.

It was also gathered that there are no plans of releasing the duo tonight.

The two had earlier filed a suit against the Inspector General of Police, Mohammed Abubakar, claiming the sum of N10m for breach of trust.