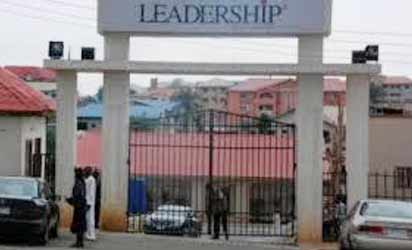 Two journalists with the Leadership Newspapers, detained by the police on Monday but released on Tuesday evening, have filed a suit against the Inspector General of Police, Mohammed Abubakar, claiming the sum of N10m for breach of their fundamental rights.

It would be recalled that the Group News Editor of Leadership Newspapers Group, Mr. Tony Amoekedo, correspondent, Chibuzo Ukaibe, Executive Director, Human Capital, Mrs. Chinyere Fred-Adegbulugbe, and the Managing Editor, Mr. Chuks Ohuegbe, were detained at the Force Headquarters but have since been released.

They were however asked to report at the Force Headquarters daily for further investigation.

They were invited for questioning following a story their newspaper published on a “presidential directive” to attack key opposition political parties’ leaders; a report which has since been denounced by the Presidency.

In a suit filed by the Company’s counsel Ugo Udoji in the Federal High Court, Abuja, the applicants sought for enforcement of their fundamental human rights as guaranteed under Sections 34, 35 and 41 of the constitution of the Federal Republic of Nigeria enforceable under Section 46 of the said constitution and articles 4, 5, 6, articles 9 (2) of the African Charter on Human and People’s Rights (Ratification and Enforcement Act).

The journalists also sought a stay against further arrest and detention by the police.