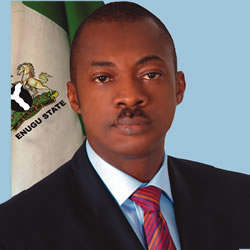 Mr Sullivan Chime was on Wednesday, hosted to a special thanksgiving service and prayers organized by Traditional rulers in Enugu State over his successful treatment for cancer abroad.

The special mass service which held at Immaculate Heart Parish, Aji, Enugu Ezike in Igbo Eze North Local Governmaent Area of the state, was attended by monarchs across the state, politicians and top civil servants.

However, Chime was represented at the service by his Commissioner for Chieftaincy Affairs, Pastor Emeka Abugu.

It would be recalled that Chime travelled abroad on September 19 2012 and only returned on February 7, 2013 upon which he revealed that his prolonged absence was to enable him remove cancerous tumours from his neck and nose before they could spread.

In his sermon at the church service, Reverend Father Uchenna Anthony Eze, who led 13 other priests, noted that the thanksgiving was exceptional as it was held while Christians were still celebrating the death and resurrection of Jesus Christ.