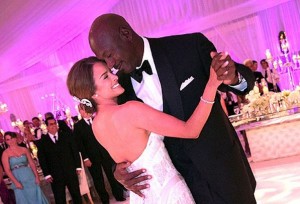 BASKETBALL great MICHAEL JORDAN’s new wife has a secret plan to beat their prenuptial agreement and grab a huge chunk of his $650 million fortune, say sources. Stunning bride Yvette Prieto is determined to lock onto “MJ’s” bank account by getting pregnant before the end of summer… whether Michael wants it or not.

The ENQUIRER previously revealed that Michael, 50, agreed to marry the 35-year-old Cuban-born model only after she signed a prenup giving her $1 million for each year they are married, which would be increased to $5 million per year if the union lasts a decade or more.

But insiders told The ENQUIRER Yvette isn’t about to settle for that! “She thinks that’s chump change and has her own plans for breaking the prenup,” divulged a close source. “She figures if she has children with Michael, she’ll have a hold on him forever, even if their marriage collapses. The child support payments alone would add up to more than $1 million a year for each kid, and the money would keep rolling in for at least 18 years. She told a friend, ‘If I have Michael’s babies, I’ll be set for life!’”

Michael already got nailed hard in 2006 when his marriage to Juanita Vanoy, his wife of 17 years and mother of his three children, ended in divorce. He had to cough up a staggering $168 million settlement.

“If Yvette’s marriage to Michael fails, she plans to soak him for a LOT more than a measly million a year,” the source told The ENQUIRER. “She’s a gold digger and won’t be happy until a big chunk of his fortune is in her pocket.

“Some family members and friends think Michael’s making a huge mistake and will pay.

When it comes to money, Yvette’s parents, Carlos and Maria Prieto, were rotten role models. As The ENQUIRER revealed exclusively, in 2005 they were both sentenced to 18 months in prison for insurance fraud involving a crooked medical billing scheme.

“Michael’s happy now,” said the source. “But with Yvette’s secret plans, I guarantee he’ll be miserable down the road.”