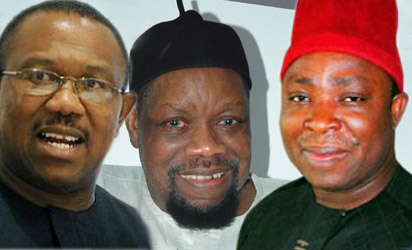 Emeka, who spoke with reporters at Nnewi, Anambra State, while addressing Nnewi North chapter of APGA, noted that the governor chose to personalise the party and annihilate the real grass-roots members of the party only to bring in strangers who he wanted to do his bidding.

“I resigned as commissioner in Governor Peter Obi’s government and some people felt that I should not do that.

“Today, those people have got me vindicated.  There are several irregularities that I saw then that made me leave the government of Peter Obi.

“What my father had in mind for APGA is not what is happening now. Ezeigbo had a vision of a party like APGA which is poised towards accommodating all and sundry and giving Ndigbo a voice in the comity of states.

“But when my father died, Governor Peter Obi chose to carry out his own agenda to the detriment of the party.

“May be he was waiting for my father to die so that he can take APGA to where he wanted and do whatever he wanted with it.

“Today, we have crisis that is man made and it all boils down to who will succeed him. But he is not fit to carry the members along and that is why we are in this situation.”

Emeka also condemned the crisis between national chairman of APGA, Chief Victor Umeh and Obi, saying Victor Umeh had continued to fight and protect all that his late father planned and anticipated for APGA.

“Victor Umeh has been a steadfast fighter for APGA and for this Igbo cause. He risked his life, spent his money and invested his time for APGA.”