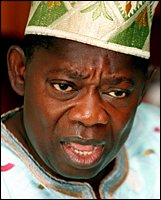 An airport under construction in Ido-Osun, Osun State, has been named after the self-acclaimed winner of June 12, 1993 presidential election, Chief MKO Abiola, by the Osun State Government.

Disclosing this at a news conference on Thursday at the Governor’s Office, Abere, Osogbo, Commissioner for Regional Integration and Special Duties, Mr. Ajibola Basiru, said that the aircraft maintenance facility of the airport would be ready by next year, while international flights would also commence next year.

The airport, which was originally designed as an aerodrome was left abandoned for several years by subsequent administrations in the state before the Rauf Aregbesola administration decided to reconstruct it.