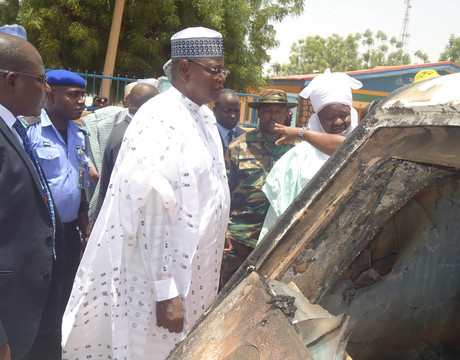 Last Sunday’s attack on a Unity Bank building and a police station in Ringim town in Jigawa State which left three policemen and two civilians dead, has been attributed to security lapses and lack of proper coordination on the part of police authorities by Governor Sule Lamido yesterday.

The governor, who cut short his annual leave in Saudi Arabia and flew back to the country on Wednesday night, spoke at the palace of Emir of Ringim – Alhaji Sayyadi Abubakar Mahmud after inspecting the scene of the incident in Ringim.

He said he will do his best to ensure that perpetrators of the attack are apprehended and brought to book.

In a chat with newsmen, Lamido said “If you are familiar with geography of the location, you can see that the target was the bank. That is why the bank was seriously damaged. They tried to break the strong room and open the safe but they were not successful. It was a professional job.

“The distance from the bank and the police station is just a kilometre. You could see that they came to the police station to get more arms and ammunition. The police station is intact. They did not destroy anything there. It is likely that even the armoured tanker stationed in front of the former IGP’s house they destroyed was out of fear that they could be attacked from it. It is obvious that the entire mission of the attackers was to rob the bank.

“But I appeal to the media to always verify their report before they write their stories. Before I came back from Saudi Arabia, the report I got from the media was that the houses of the former IGP, the Minister of the Education and the police station were all razed down and you can see that there is nothing like that”.

The governor said security lapses and lack of coordination by the police is also a problem.

“But again if you know security management and what it entails, obviously there was a problem in coordination and this is very clear. Looking at the distance between the police station and the bank, the police could have sealed the area and prevent the attackers from going out if they have the right equipment, weapons and coordination. The robbers had a field day because the police could not fight them. The truth is that the police is simply ill-equipped”, he said.