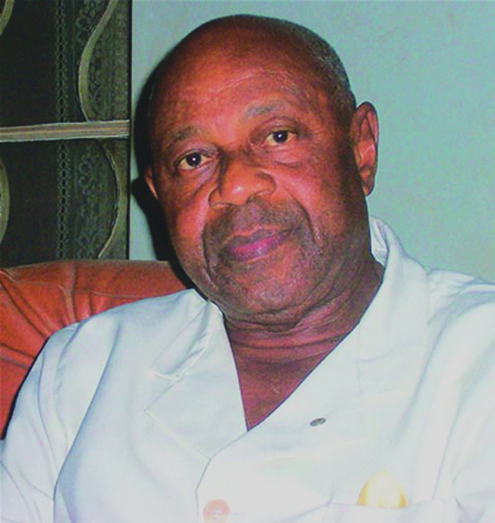 Prof. Tam David-West, a former Petroleum Minister and later Minister for Mines, Power and Steel, speaks on the state of the nation with in this interview culled from PUNCH.

The outspoken don was at his vintage best and fired from the hips as he touched on the Jonathan Presidency, 2015, oil subsidy regime, state of emergency and the North’s purported claomour for power among others.

Having been in government twice as minster, what do you think about the state of the nation today?

If these bombs going off everyday kills any of these corrupt leaders, I will not shed any tears; I’ll clap, because they are destroying the system. It has become so bad that graduates are looking for driver jobs because there are no jobs. Graduates are serving as waiters in hotels and we say that we are a great country. During my time as minister, $1.5 was one naira. Two naira was £1. Now it is N240 to £1 and N160 to $1. That was how powerful we were. And they say we are not a failed state. If we are not a failed state, then we are a fast failing state. The earlier we realise it, the better. Nigeria needs emergency. President Goodluck Jonathan should use his power as the President to declare the whole of Nigeria an emergency state.

The aviation ministry has said it would launch an investigation into the documents that River State Government used to purchase its aircraft. What is your take on this?

That plane has been flying in Nigeria for nearly one year. If the aviation ministry tells me that the Rivers State’s plane was flying in the country without documents, and they did not know, that is self indictment. How can a plane fly in your air space for one year and it is now you realise that it does not have documents? What if it was an enemy’s plane? Governor Rotimi Amaechi cannot be that irresponsible to fly a plane without documents. In all of these, my question is, why now? What has Amaechi done? During the 2011 election, Jonathan had the highest vote in Rivers State. Without the help of the governor of the state, he couldn’t have gotten that and they are very close. The Minister of State for Education, Mr. Nyesom Wike, was Amaechi’s bosom friend. Wike was Amaechi’s Chief of Staff. All that is happening in Rivers is personal and it is dragging the state and the country back. Jonathan heard that Amaechi wants to contest for vice-president in 2015. He (Jonathan) started fighting him. It’s all personal vendetta. The Nigerian Governors’ Forum, which is a forum of all state governors, does not belong to the Peoples Democratic Party, and should not be under the control of the President. I’ve told Jonathan before, I can reveal it. There is a proverb in Ijaw which says that if you chase a chicken too much, you will fall down and the chicken will go. If all Jonathan is doing is to guarantee 2015, I tell you, Jonathan may lose 2015 by fighting 2013. Amaechi has controlled the state very well. They expected action and reaction from the state which would have led to a crisis and then they would have declared a state of emergency. But if they are not careful, the way they are going, they will plunge this country into a serious crisis. It happened in the West, when (Ladoke) Akintola and (Obafemi) Awolowo were fighting. How did it end?

Campaign for re-election of Jonathan in 2015 seems to have heated up with recent controversial comments by Asari-Dokubo and others.

People like Asari-Dokubo cannot help him. Asari-Dokubo is my cousin. How can Asari-Dokubo give Jonathan the presidency? He said the northerners are parasites. He used to stay with me. He dropped out of the university twice. He dropped out from the University of Port Harcourt; he dropped out from the University of Calabar. If you did elementary biology, you will know that there is no state in the country that is a parasite. Is it people like Edwin Clark that will help him win election? Edwin Clark abused me that as a former Minister of Petroleum, I don’t have a house. I think if I don’t have a  house as petroleum minister, then it’s a plus to me. The total votes Jonathan had in the Ijaw area is 24 per cent, they should go and check. It was not the Ijaw people that put Jonathan in Aso Rock. Jonathan is in Aso Rock due to Olusegun Obasanjo, a Yoruba. The lady who moved the motion for the adoption of doctrine of necessity, Prof. Dora Akunyili, is Igbo. The person that moved the motion for Jonathan to become acting President is an Hausa. Ijaw people contributed less than 24 per cent to Jonathan becoming President. Therefore, Jonathan cannot allow Asari-Dokubo and others to be abusing people that made him the President. How many people are loyal to Asari-Dokubo? It’s just the Niger-Delta People’s Volunteer Force. That group does not exist again.

As a former petroleum minister, how do you rate the current administration’s management of the country’s petroleum resources and the economy?

I still have hope. God will intervene. But things cannot continue like this. We are slipping gradually into anarchy. Between anarchy and collapse is a very little stop. The polity is heated. Next year will be very hot. I’m not sure what will happen between now and the end of the year. I can see more crises.

But don’t you think the state of emergency declared in Borno, Yobe and Adamawa states would stop the crisis in the North, and save the country from the looming anarchy?

I’ve told them that emergency rule will not stop crisis. The Federal Government cannot win Boko Haram with force of arms. When it was happening in Niger Delta, I told them they cannot stop the militants with force and they realised it. You can only disperse the insurgency with force.

Recently, the International Monetary Fund asked the Nigerian government to remove fuel subsidy. Considering the protest of it generated in 2012, what should the Federal Government do?

IMF has no right to ask the Federal Government to remove subsidy. When I was in government during Shehu Shagari’s time, they were negotiating some IMF loan, (Muhammadu) Buhari came and received IMF loan; (Ibrahim) Babangida came and received IMF loan. If you want me to borrow money from you and I say I don’t want to borrow money and you say I must borrow, that means that something is wrong with you. IMF cannot be friends with Nigeria. Both IMF and World Bank do not mean well for Nigeria. The fact is that there is no fuel subsidy. Anybody talking about fuel subsidy is fraudulent. If IMF said there is fuel subsidy, then IMF is fraudulent. I have a document in which (Ngozi) Okonjo-Iweala, who is the Minister of Finance, said there was mago mago in the administration of the so-called subsidy. We are paying for fuel that was not imported. They would move fuel from Port Harcourt to Lagos, they would say they brought from abroad. There is no fuel subsidy. Didn’t they say that if fuel did not sell for N141 per litre, Nigeria will collapse? The Governor of the Central Bank of Nigeria, Sanusi Lamido, said so. Jonathan said there was no going back. Didn’t he bring it down to N97 per litre? Has Nigeria collapsed? All of them are lying. I’ve been challenging them for about eight months now. I challenge Jonathan and his ministers to a public debate and I will prove to them that there is no fuel subsidy. Fuel should not cost more than N40 per litre in Nigeria. I said it; a professor in Texas, USA said the same thing that it should be around N39.50. They are lying, they know how much they are gaining. There are four refineries and none of them is operating at 40 per cent capacity. They deliberately destroyed the refineries so that they can import fuel.

The North seems hell-bent on getting a President from the region in 2015.

The North is not hell-bent on getting a northerner as President in 2015. Some reckless Ijaw are even more hell-bent in getting Jonathan to go for second term. There is nothing like northern domination in Nigeria. To be the President of Nigeria, you must have popular votes from different parts of the country. We have 36 states, about half are in the North and the rest, in the South. So, one part cannot really dominate the other. The North is not insisting on the next President coming from the North. Every party has the right to institute any policy they want. PDP said there should be rotation between North and South and Jonathan said yes and signed. Now, you signed that you are going for one term, the Governor of Niger State, Aliyu Babangida, is a responsible man, he cannot be lying. If they are serious, let them form a committee and Aliyu will present the document to the committee. The way Jonathan is going, if he does not restrain the people who are speaking for him, he will lose 2015 in 2013.