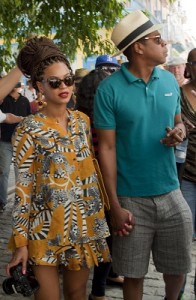 Last week, entertainment channel, E! “confirmed” through its website rumours of the songstress and mother of one’s second pregnancy. E! based its report on information from undisclosed sources close to the singer.

Rumours of the probability of Beyonce carrying her second child had started when the singer, who is currently on an European, had cancelled an appearance in Belgium due to “exhaustion and dehydration.”

The singer wrote a personal handwritten letter in which she apologised for disappointing for her fans and stated that it was “first time she had ever had to cancel a show.”

The internet was soon awash with rumours of a possible arrival of a sibling for Blue Ivy, first child of Beyonce and Jay Z.